I will describe you my experience …

It was Friday night, I was watching  tv with my colleague Lorenzo, when a friend of his asked us via facebook if we wanted to join him the next morning in this challenge! It was the first time l heard about this, but I said yes. The next morning me , Lorenzo, Anas and Nina we were gathered in Gamlastan ( the old city, Stockholm) at 10 a.m.

There are three types of challenges, and our friend chose the second one:

1)ASTRID’S ADVENTUREs, a great introduction to Stockholm to newcomers .

2)BJÖRN’S BATTLE, for those who are in love with Stockholm .

3) GUSTAV’S GLORY, for the people they think they have done everything in this city.

A man wearing a white hoodie where was written ‘100 point challenge Stockholm’ came and the adventure began. We were three teams , he gave to every team a cotton bag where were all the things we needed :

3) a map of Stockholm city

2 hours , 23 challenges all over Stockholm city, you vs the city!

In these limited time we had to solve the clues, take pictures to prove some of our tasks or even make handcrafts with things can be found on the streets. For example , when we found the most narrow street in Europe or the tiniest statue in Stockholm city, it must be captured, we had to make a mask or draw something also!

Each challenge has some specific points, in total they are 100. In two hours from the beginning each team has to gather again in the meeting place. Then the coordinator takes the envelopes from each team, calculate the results and announces the winner team! The winner team receives a symbolic gift.

We were in absolute hurry, almost running all over the city and of course all team members together, but we definitely enjoy it. We weren’t the winner team but it was a great experience, l recommend it, you can book your ticket online at https://www.100pointchallenge.com/ 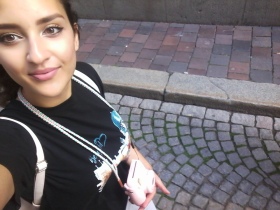